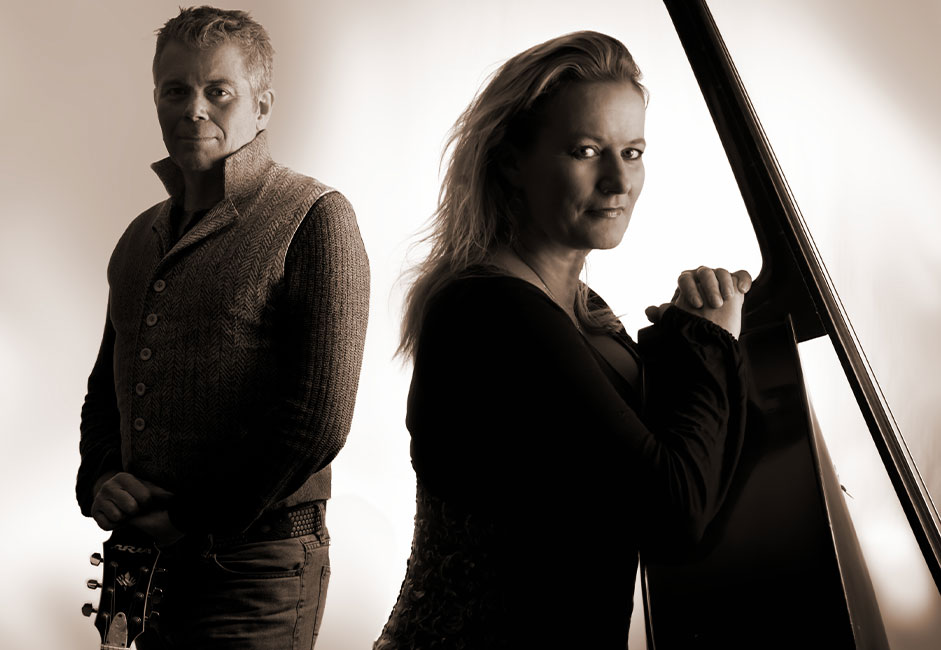 The creative combination of a deeply traditional folk musician with a blues and roots singer gives Sadie and Jay an intimate and enchanting sound. They play beautiful songs with exceptional vocals, glorious harmonies, intricate finger style guitar, bouzouki and double bass. They are influenced by the storytelling nature of the Anglo-Celtic traditions and contemporary folk, blues and roots music which reflects in their collaborative songwriting.

Born in Scotland and raised in New Zealand, Jay (David J Penman) grew up in a musical family immersed in traditional British folk music. For many years Jay has been a member of four part family A-Capella group The PENMANS. With Welsh heritage, Sadie’s love for singing is instinctive. From jazz & blues to world & roots music, Sadie has performed with accomplished musicians, theatre and cabaret enriching her spellbinding vocal ability.
For the past six years Sadie and Jay have been performing as a duo in and beyond the Brisbane folk and festival scene. They’ve had two very successful tours in the UK in 2016 and 2018 with a third scheduled for 2020. Most recently they were guests at Upton Upon Severn and Great North Folk Festivals in the UK and they were the headline act for New Zealand’s Hamilton Folk Festival in 2019.
Sadie and Jay have released three original studio albums, Curious (2015) Rogue Folk (2017) and A Passing of Seasons (2019) featuring several high profile South East Queensland musicians. Their third studio album features refined and spirited historical Australian stories in Sadie and Jay’s characteristic modern folk style.

Richard Grainger – British folk singer/songwriter & Festival Director
“Sadie & Jay – fabulous duo, highly professional with exquisite arrangements of songs in the folk and acoustic style. Sadie is a beautiful singer and is the double bass player, while Jay provides expert well worked guitar accompaniments. Both take lead vocal and their harmonies make the hairs on the back of your head curl.”

Alison Bell – Vice President of The Brisbane Folk History Project
“This is the third album by Brisbane based duo Sadie and Jay and it is possibly the best of Australian contemporary folk music that you could purchase. Few artists pay such exquisite detail to the total soundscape. This album will leave delightful sounds echoing in your head long after you have stopped listening to the actual tracks…”

Robin Brew – Hamilton Folk Club NZ
“This all too temporary importation demanded my attention from their first offering, not only for their superb musicianship, lovely use of dynamics, vocal shading etc but really topical, relevant and brave songwriting about issues that need raising.”