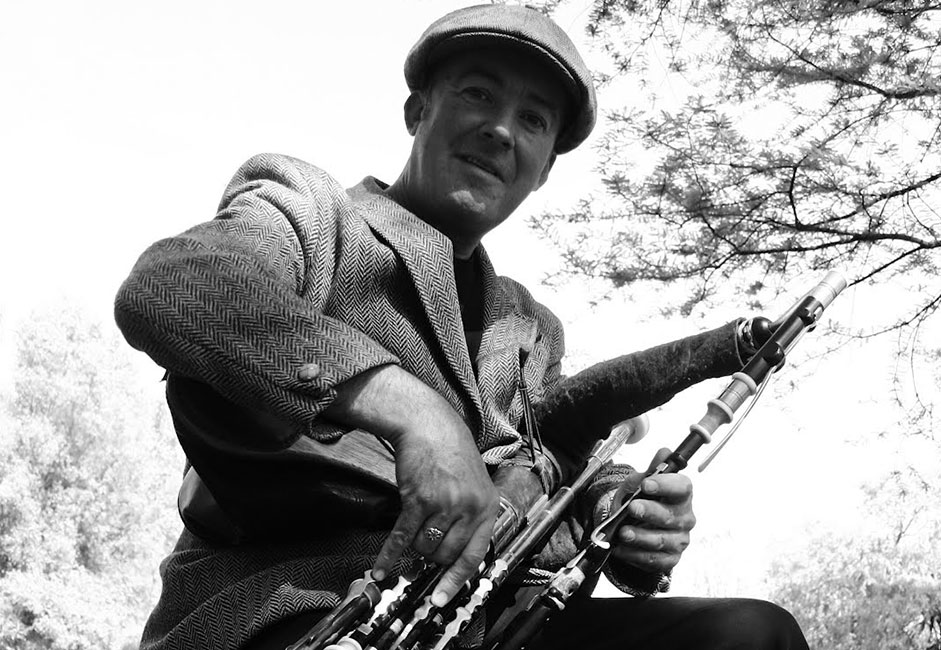 Specializing in the ‘Gentleman Style’ of union piping, Dicky has been playing the uilleann pipes for over 35 years (tin whistle 45yrs) and throughout this period has performed solo uilleann piping at most of the major Australian Music Celtic Festivals including performances at Woodford Malany (additionally appearing at the Malany Showground before it relocated 20km to Woodford, QLD), The Australian National Folk Festival and Port Fairy in addition to many festivals throughout Ireland, the UK and Europe eg playing every year at Europe’s largest Celtic festival the Festival Interceltique in Lorient, Bretagne, France as well as performances at The Willy Clancy Festival, Miltown Malbay, Co. Clare, Ireland.

Concert performances, recitals and workshops have in the past been conducted for schools in metropolitan, country and outback Australia.

Dicky was also invited and flown to New Zealand from Tasmania by the Nelson School of Music to hold master classes in uilleann piping and reed making techniques in addition to recitals and concert performances for the New Zealand Uilleann Pipes Society.
From the early to the mid 1990’s, Dicky could also be found occasionally performing at Port Fairy or The Aussie Nash with the Irish hard shoe dancing maestro Conor Hayes (from Melbourne). In 1996 Conor entered for and won the World Irish Dancing Championships, held in Dublin, where he shortly afterwards joined the Riverdance as one of its principal dancers (for the next 11 years!).
Dicky is a much sought-after reed maker for the uilleann pipes eg when the Riverdance was on tour in Australia in 1998 the uilleann piper Declan Masterson was having some chanter reed problems so Dicky made him a replacement double-reed telling Declan it should last him well. Declan has recently (2018) informed Dicky that not only has he used the reed every day since then with no problems in the Riverdance and the Patrick Street band concerts/recordings over the many years since but is still using the same problem-free reed today. January 2019 shall be its 21st birthday!
Dicky Deegan’s playing has been recorded (at Jackie Daley’s old house, Dooris Mill, Kinvara, Co Clare, 1994) for, and by, the Traditional Irish Music Archives, Merrion Square, Dublin.

In addition to his performances on ABC & SBS TV/Radio (Australia), Canal 1 TV (France), the BBC (UK), RTE and Raidio na Gaeltachta (Ireland), Dicky has recorded and worked with many artists over the years including the late Billy Moran, The Fitzgeralds, Jackie Daly, The Furey’s, Mairead O’Sullivan and Donal Lunny.

Over the years Dicky has performed several times in the Sydney Opera House, commencing 1994 in partnership with the Sydney Opera House Trust and the renowned Aboriginal didgeridoo player Mark Atkins where, after the concert, they performed an additional and unique concert duo of uilleann pipes and didgeridoo from on top of the Opera House Sails as part of the Sydney Opera House’s 20th anniversary celebrations. Accompanying the music in the wide open space in front of the Opera House steps, a choreographed ballet was performed combining light dance, heavy machinery from WA and lots of fireworks from the Opera House! The ‘dancing’ was achieved by substituting ‘monster diggers’, on loan from the Western Australian mining industry, filling the role of principle ‘dancers’. An interview was given afterwards with Phillip Adams on ABC’s radio programme Late Night Live.

In 2001 he was honoured to have been one of the Australian Chamber Orchestra’s guest solo musicians, flown in by the ACO’s Artistic Director, Richard Tognetti, to perform in one of Australia’s finest and most exclusive venues celebrated for its outstanding acoustic properties, ie the acclaimed ‘Barrel Room’, at the prestigious ACO-run Huntington Chamber Music Festival in Mudgee, New South Wales (concert recorded by ABC Classic FM). Dicky also toured Australia with the IHOS Opera Company, playing uilleann pipes for their production of, ‘To Traverse Water’.

Dicky conducts workshops on the playing and maintenance of union and uilleann pipes as well as demonstrating double and single reed making techniques.

Dicky has four albums of mostly solo uilleann piping: 1. By the River of Gems (1989); 2. An Phib (released by An Piobaire Uilleann at the Willy Clancy Festival, Miltown Malbay, Co Clare 2002); 3.Music of the Irish Celts (2005); 4. Hibernia (2012, double CD album, available in Brittany). Albums 1, 2 and 3 were assisted by the Minister for Arts, Sport and Recreation through Arts Tasmania.

Presently residing at Haworth Hall in the East Riding of Yorkshire in the UK, he is still performing, teaching whistle and uilleann pipes, reed making, working as a session musician, conducting workshops, recording and compiling a definitive and detailed collection of uilleann pipe music notation for future publication. The music from his album An Phib has also been written down and notated in detail including the uilleann-pipe gracing. He has also recently been playing with the fiddle-player Milo Thelwell in a series of fiddle/uilleann pipes recitals held in villages and small towns around the Nth Yorkshire moors and coast.

He has been invited to perform for the monthly Cobblestone series of concerts, Dublin, by the Irish Uilleann Pipe Society, Na Piobaire Uilleann, Henrietta St, Dublin.

In addition to the above, Dicky is a member of several bands and performs as a soloist on a regular basis around the UK, Eire and Europe through an Irish music agency based in London.