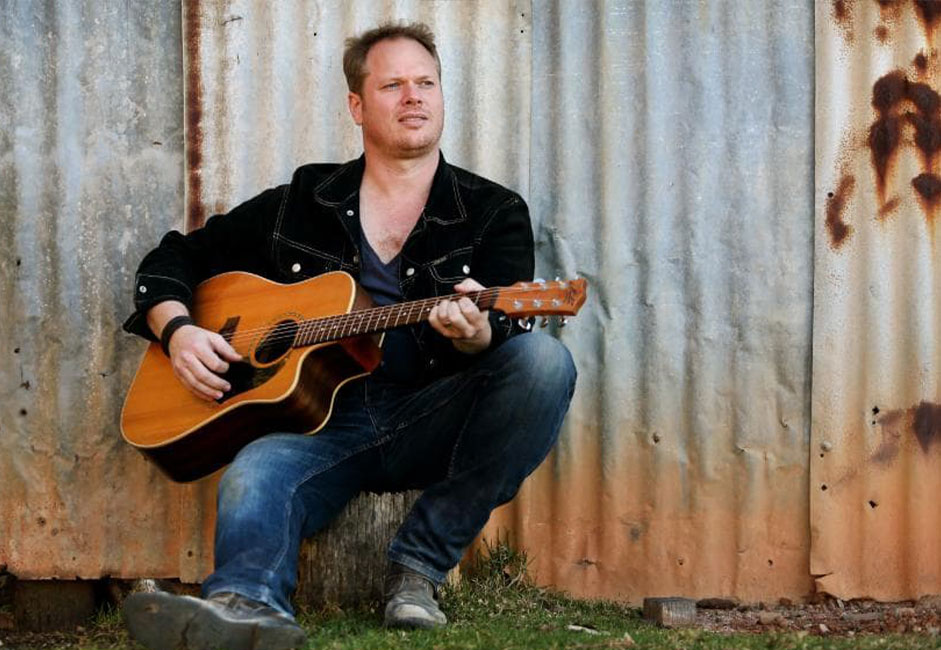 Ben has travelled and performed all over the world including a two and a half year stint in Europe with a style that is a blend of pub rock, blues and country. He has performed alongside of Australia’s top recording artists while touring extensively around the country.
Born and raised in Sydney, Ben Ransom, started playing guitar and writing song at the age of fifteen. Growing up, he was constantly exposed to a broad range of music that strongly influenced his own original writing style. It has allowed Ben to draw the listener in on many different levels and connect in a more personal way.

In 1999, Ben left Australia to spend time in Europe, essentially to hone his skills and develop his musical style. He cut his teeth in the heart of London’s West End with a permanent residency in one of the most happening venues at the time. Ben’s down to earth personality and ability to deliver live saw him become one of the hottest, most sought after artists in that scene, bringing “the spirit of a B&S Ball to the heart of London”. Ben toured extensively throughout the UK and Europe before returning to Australia where his passion in music held root.

In 2010, Ben completed his first studio recording, “The Long Way”. While unreleased to this date, Ben says ‘the album was a labor of love that gave him a vehicle for expression and allowed him to explore all facets of his personality through various styles of music. The first single, “Bourbon & Sunsets”, was a runaway hit – peaking at #2 on the Hot Country Top 50 chart and performing solidly on the CMC Top 50.

In 2012 & 2013 he was a finalist in the coveted Toyota Star Maker competition – the same competition that launched the careers of Keith Urban, Lee Kernaghan, James Blundell and Samantha McClymont.

After graduating from the CMAA Academy Of Country Music in 2012, Ben completed his debut album, “Slow Burn” with Matt Fell and Glen Hannah. The first single, “Truck Stop Honey”, received national airplay and earned him a nomination for Contemporary Song of The Year at the TSA Awards. The album was released in 2013 to rave reviews and continued to produce hit singles in the form of “Big Country Sky” and “You’re On The Top of My To-Do List”.

By 2013, Ben was touring nationally and appearing at major Festivals and in October of that year, Ben was introduced to international hit maker and multi million record selling producer, Rob E.G. Porter. This resulted in the collaboration on the Jackson Browne classic, “Somebody’s Baby”. Released under Porters’ famous Wizard record label. The track was launched at the 2014 Tamworth Country Music Festival and entered the charts at #7.

While plans were being drawn up for his sophomore studio album, Ben and company performed at the iconic Sydney venue ‘The Basement’ which resulted in the live record, “Ben Ransom – LIVE”. This release saw unexpected hits “One More Beer” and “Mamma I’m Coming Home” become staples on regional radio, while setting the platform for the stellar (studio recorded) single, “Dry Town”. This peaked at #2 on the Country Singles Chart and
by the following year, Ben was named Best Male Rising Artist at the 2016 Southern Star Awards.

In 2017 Ben joined with Country Rocks Records as the first artist signed to their newly formed label.
“Let’s Go Driving”, (an upbeat country-rock smash) was the first release under this new deal, which gave Ben his very first #1 single, staying at the top spot for six consecutive weeks on the Country Tracks Top 40.

In signing with the new label, Ben stated, “I’m absolutely stoked to be part of the ‘Country Rocks’ family – knowing that I am associated with a team that actually walks the walk! These guys are out there putting in the hard slog, which is why their passion for music and ethos of ‘respect’ for the artists is so refreshing”,

The new studio album – “101” was released in January 2018. Two more singles followed, “You’re The Reason Why” and “Same Song, Different Day” both hitting #1 before the huge mainstream hit “Young Years” was unleashed! This saw Ben team up with Australasian icon Sharon O’Neill in a duet of the song that she wrote with her partner Alan Mansfield and previously released by the legendary band Dragon.
Also featuring on the album was some of the last recorded work by legendary guitarist Phil Emmanuel.

Over the summer of 2018/2019 Ben began working on a new album and once again teamed up with producer Matt Fell. Recorded in Nashville and featuring a raft of industry heavyweights, this recording is shaping up to being some of Ben’s best work yet!

One thing is for certain, Ben Ransom, is the real deal and is destined for very big things.