It’s been a very full year for all of us, and it’s actually one whole year since I started to write Celtic News. I am most grateful to all who have contributed so generously this year – and I urge you to please keep your news coming in!

Nominations for The Australian Celtic Music Awards are now closed, but nominations for the annual Triquetra Medallions are now open. Nominate the people that you would like to see honoured.

The Australian Celtic Festival Committee is interested in hearing from prospective vendors specialising in food, beverage, produce, merchandise, jewellery, book sales, musical items and other retail options for stalls at the Festival site, The Australian Standing Stones. Stallholder applications for the 2017 Festival are now open.

at the 2017 Australian Celtic Festival

One fortunate couple will win the opportunity to “tie the knot” in a traditional Celtic style, 100% legal wedding on Saturday 6th May 2017, at The Australian Celtic Festival. Couples who are genuinely interested in getting legally married in a traditional Celtic ceremony with an Irish theme can find more information or enter online via the website. Applications close on 15th January 2017.

Here’s a profile of one of the performances that you will be able to catch at The Australian Celtic Festival. 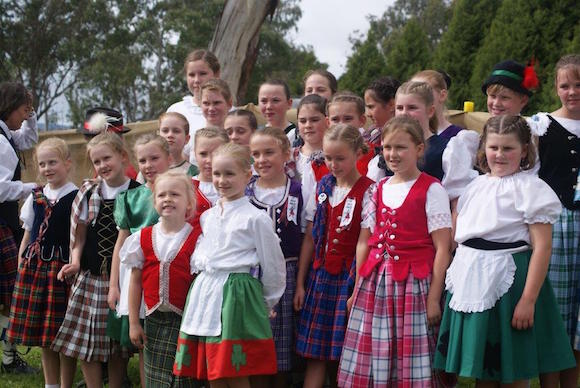 Glenmore Highland Dancers are a young (5-14 years) and enthusiastic group of lads, lassies, bochals and colleens with an injection of Scottish and Irish blood running through their veins!

With the support of trusty Piper Rob O’Brien and parents who willingly and generously share their desire to perform, Glenmore Dancers have been welcomed entertainment at many Glen Innes community events including fetes, concerts and market days throughout the year.

For the past 20 plus years, Glenmore Highland Dancers have made a special effort to create a magical performance for the Celtic Festival. They appreciate the warm response from both their local audience and the many people who travel from around Australia to experience a Celtic weekend.

So, a special hint for 2017 – do not miss Glenmore Highland Dancers as they pay tribute to their Irish connections on stage! The dancers will certainly be looking out for you at the Crystal Stage!

We’re all so excited about the 25th Australian Celtic Festival. The Committee and Friends of the Celtic Festival have joined forces to bring a taste of the Festival to south-east Queensland. We hope you enjoy the concert and that you join us in May in the beautiful Glen Innes Highlands. Tickets on sale from 9th January. 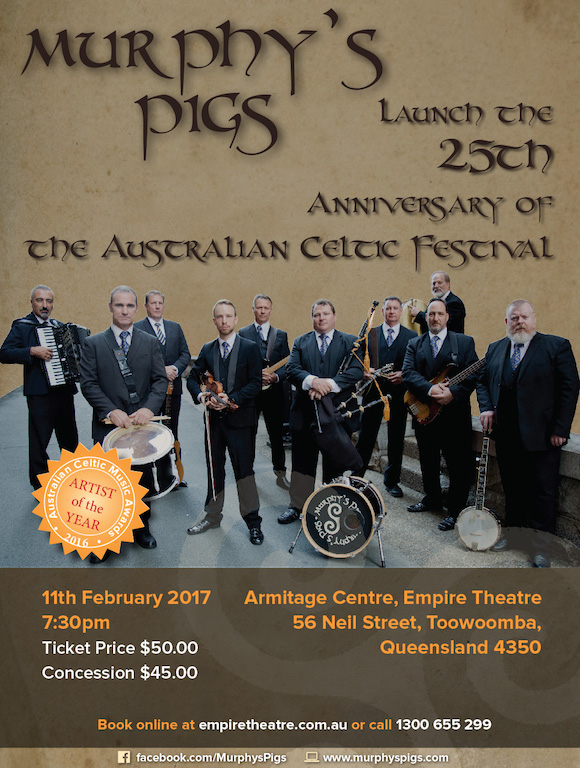 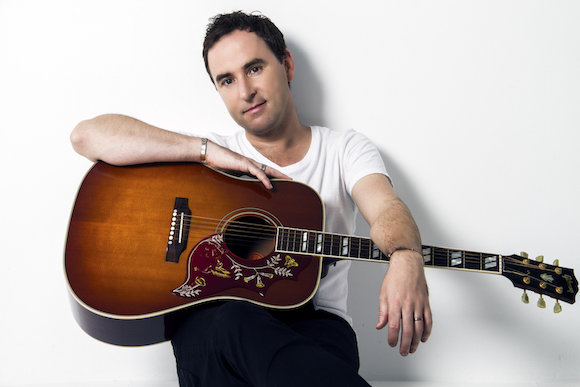 The Australian Celtic Festival is delighted to welcome Damien to our 25th Anniversary Festival, celebrating the Year of Ireland.

Damien Leith emerged from the small screen in 2006 and found a place in the hearts of a generation of Australian music lovers. With a cluster of hit singles (#1 ‘Night of My Life’) and albums (Where We Land, Catch The Wind, Remember June, Chapter Seven, Roy, Songs From Ireland), TV hosting, two published novels (One More Time and Remember June) through Harper Collins Publishing, and a recording studio in Sydney, Damien Leith is one talented and in demand artist. He lives in Sydney with his wife Eileen and three young kids, Jarvis, Jagger and Kikki.

Performing at festivals and concerts around Australia from an early age, Siobhan is rapidly gaining recognition on the international stage. She has spent the last couple of years sharing her time between Australia and Wales while touring the UK, Europe, Japan and Siberia performing in concerts, festivals and shows – including Triskell Celtic Festival in Italy and Lorient Interceltique Festival in France, 2 solo European concert tours, and in Celtic rock operas “Tristan & Yseult” in France and Siberia, and “Cap’taine Kid” in France.

This December, Siobhan will be performing in a new Celtic rock opera “Excalibur” touring 13 arenas throughout Germany.

Siobhan has recently released her 5th album “Entwined”, which includes 8 original and 7 traditional songs – including songs in the Welsh, Irish, Scottish and Breton languages. “Heart-wrenching traditional Celtic ballads entwined with original contemporary Celtic songs… all woven together by Siobhán’s exquisite, emotive voice.” Be prepared to be enchanted by Siobhan’s stunning voice and gentle harp playing.  www.siobhanowen.com.

Siobhan is nominated in the Australian Celtic Music Awards categories of Album of the Year, Song of the Year and Female Celtic Artist of the Year. The producers of her album ‘Entwined” are also nominated for Producer of the Year.

Brisbane-based acoustic guitarist Michael Fix is nominated in The Australian Celtic Music Awards categories of Instrumental of the Year and Male Celtic Artist of the Year, for his album “Bending Air”.

“Bending Air” is Michael’s fifteenth CD release, and emphatically shows why he has become such an in-demand concert artist, touring internationally every year, and winning fans from all over the world.

Michael is a true artist: each successive album follows new paths, and he is not afraid to try new ideas, or take risks. By sharing universal emotions and experiences, Michael has been able to touch listeners on a very deep and personal level. “Bending Air” starts in a fashion familiar to Michael’s fans – the fírst four tracks are bright, bouncy, and very much in the Chet Atkins-influenced sunny fingerstyle guitar mode for which Michael is known, including a reading of Odetta Gordon’s ‘Hit or Miss’, highlighting Michael’s growing confidence as a vocalist.

But then the album turns decidedly darker with the powerful ‘Guernica’. lnspired by Picasso’s 1937 painting of the same name, it was written in response to the atrocities happening in the world today. ‘Guernica’ has already become one of the most talked-about performances at Michael’s concerts. ‘Poetic Justice’ and ‘Losing Myself remain in a somewhat reflective mode, but then the mood lifts with a medley of three traditional tunes performed regularly by Australia’s most-loved bush band, The Bushwackers, arranged for solo guitar by Michael. (Michael was a rnember of the band in the 1980s, and again briefly in the 1990s).

As a reflection of his live set, Michael always adds some cover arrangements into the mix. The Beatles’ epic ‘A Day in the Life’- very familiar, but rarely covered – features the guitar group from the 2016 Winterbreak Music Camp re-creating the orchestral cacophony that is such a feature of the original. The unexpectedly fragile and quiet vocal finale, ‘Slip Away’, penned by Mark Cryle, is one of the most intimate tracks Michael has even recorded.

More information:
“Bending Air” is available in Australia in stores through Checked Label Services, online direct from Michael’s website, and in iTunes.